Billet Eco 8 : Tomorrow Will Be Software

Tomorrow Will Be Software

Of course the term "monopoly" is inappropriate: no public force obliges anyone to use Google or Facebook rather than their competitors. But a company having acquired a "dominant position" in a market will usually keep it for a long time, thanks to two factors that complement.

The first one is purely technical and entirely due to technological changes: the dematerialization suppresses nearly all reproduction costs, only the cost of creation can be important. Once a software is developed, a song or a movie recorded, their copy will be virtually free: the first to invent a product with low marginal cost has a decisive advantage over its imitators. Consequently, markets have multiplied to the point that monopolistic competition has become a fundamental feature of modern economies.

The second factor is psychological: it is the human crave for conformity, which is so powerful that monopolistic competition should be the norm, not the exception.

Social psychology studies have shown that the vast majority of humans will submit to the dominant, often to the point of being able to go up to torture and kill a stranger if asked by someone powerful (as in the famous experiment by Stanley Milgram illustrated by the movie I... comme Icare). And the majority itself is perceived as a dominant power: in 1955, Solomon Asch had shown that two thirds of the population are willing to challenge their direct perceptions in front of a divergent majority opinion. And it's not reluctantly, on the contrary: Campbell-Meiklejohn et al. (2010) have found that this submission to the opinion of the majority will trigger the reward areas of the brain. Moreover, this trend is reinforced by what psychologists call "Mere repetition effect": the pleasure to remember something implies that the more a product is seen, therefore remembered, the more it will be appreciated (Fang et al., 2007), a simple massive advertisement is enough.

The result is visible: the freer people are to do what they want, the more they want to do just like their neighbors; the greater the choice of products, the more they choose the same as the others. Success creates success: the biggest entrance cost in a market is no longer constituted of manufacturing investment, but of the acquisition of the critical mass of customers that will trigger this positive feedback.

This is why marketers are increasingly using psychological triggers to reach this step: the number of customers has become the first value, before sales and earnings.

Uberization: Software will eat the world

This strong incentive to the first does not imply that the current leaders will remain irremovable: technological development does not only increase opportunities for new markets, it serves primarily to reinvent all existing products and thus redefine all markets.

In 2011, Marc Andreessen, the creator of the first Internet browser in history, announced that "Software will eat the world." It is just the continuation of a movement already started with the first computers, but which accelerates and expands. Silberzahn Philippe, professor of entrepreneurship, gives the example of the GSM industry, which had not been able to understand, even several months after the launch of the iPhone in 2007, "that the mobile phone has become a computer we put in a pocket". As noted in the latest Billet Eco (MBN 51), the automotive sector is currently in the same situation: soon we will move in computers that carry us.

We are indeed at the very beginning of a revolution that will overthrow all sectors: the value is transferred from hardware to software. This is already the case in the transportation sector, where Uber application has brought down the value of taxi licenses, to the point that the press has named "uberization" the transformation of the economy caused by this transfer. This will be tomorrow the case in the construction sector, where 3D printers will revolutionize building methods and transfer the value to their programs, and eliminate many intermediate operators.

In all sectors and for all activities, creative people will invent new ways of doing things by integrating the software in the process, and will gain most of the value. This massive transfer redistributes the cards and more and more local monopolies will be replaced by new big companies that will dominate the world and will make the wealth of their countries. We have already shown (MBN 45) that in this great redistribution, the superlinearity effect will favor the cities that are already creative.

Some clockwork gears are equipped with a mechanism, called "ratchet", which only allows movement in one direction. In genetics, the ratchet image is used to illustrate the accumulation of mutations from one generation to another, with no second chance offered to its bearers. In economics, disruptive innovations have precisely the same effect: by creating new markets they allow new monopolistic positions overthrow the dominance so completely that no rollback is possible. There is a before, and there is an after.

As written in the previous Billets Eco, Monaco has everything it needs to attract those who will invent this new world and will make the wealth of the Principality for the decades to come. It is urgent: the ratchet is activated, no one can go back.

PS: The last Billet Eco, published in the MBN #51, had announced that Monaco will soon have to adapt itself to the revolution of autonomous vehicles. Singapore is already beginning: in association with MIT, his Government launches this summer a large-scale test of taxis without driver (CityLab, June 25, 2015).

Rem: The MBN #52 can be downloaded in PDF Format on the FEDEM website: www.fedem.mc. 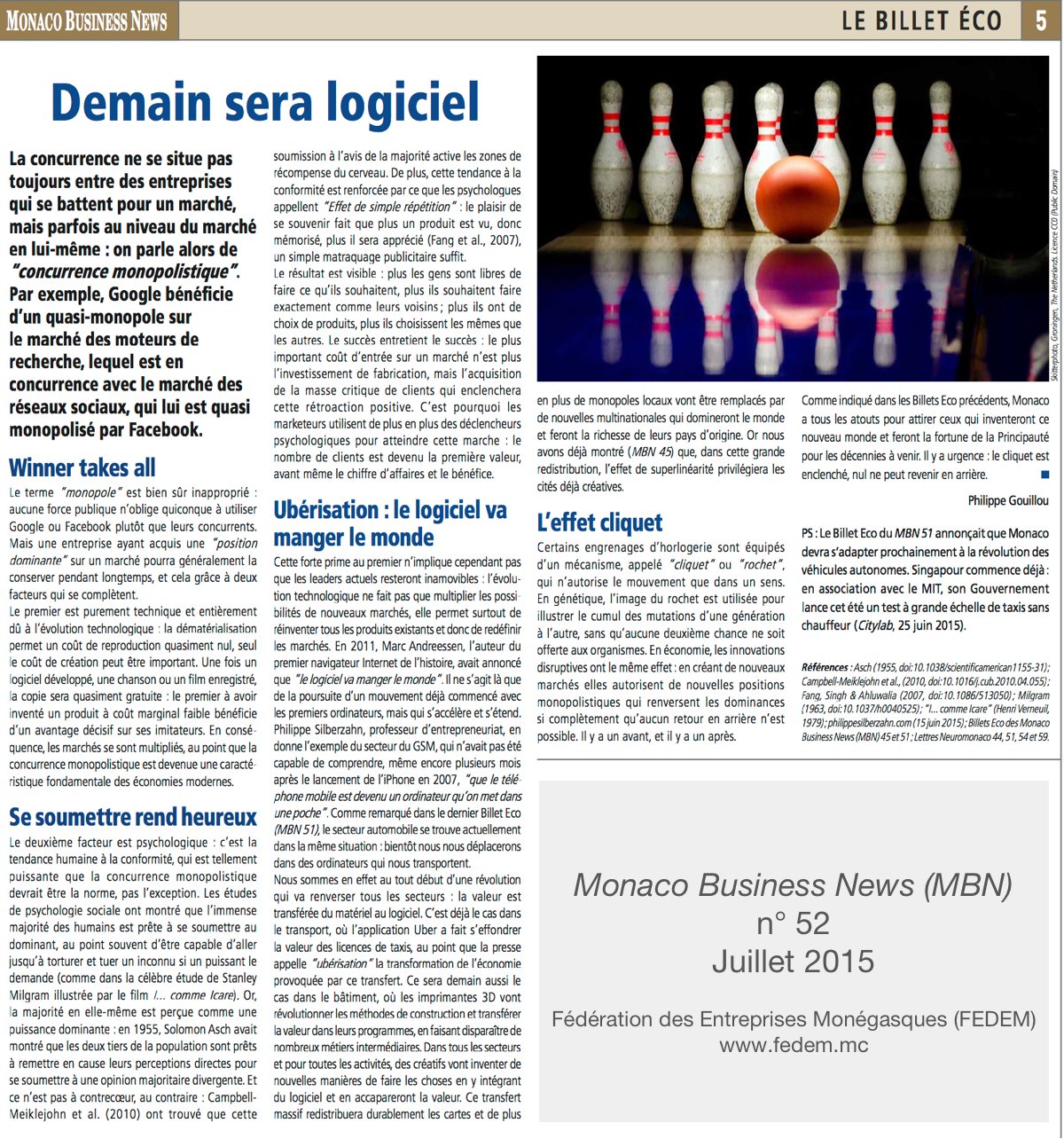 Billet Eco 25 Demography is everything